After a bit of a hiatus, recent events have prompted us to once again resume posting on the blog. Enjoy!

This last week, we were approached by Dennis, as he wanted us to be featured in an upcoming Eco Peaks newsletter. As it required us to explain about our server in more detail, including current/future government and economic systems, as well as what we have been up to lately, below you’ll find just that – our recap of past events. Here’s to plenty more good times and memories! 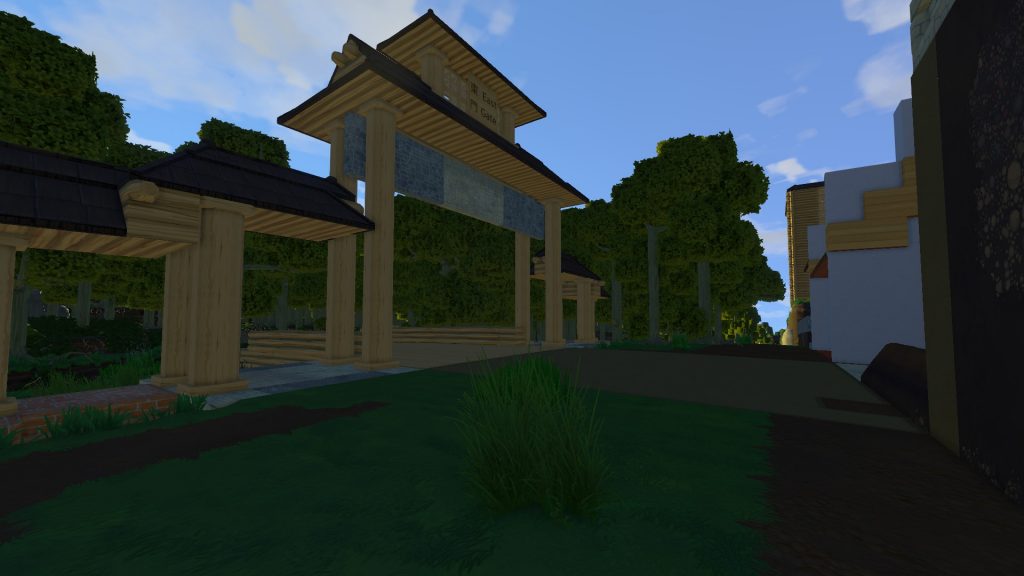 The first week starts the same as most other servers out there with just a few small exceptions – as a community we prioritise the clearing of major pathways between the plots to ensure there is easy accessibility across the Capitol and where possible make travel to any outlying settlers. The basic road pattern is claimed by staff before the server is officially opened to players; this ensures a neat and tidy foundation and imparts a sense of structure and order on the early parts of the game which can often seem wild and messy.

As the start began in an area in the total absence of trees, gaining access to a logging source was of paramount importance. The pre-built bank became an early point of social gathering as early arrangements for buying and selling wood, stone, and wood pulp quickly forwarded the building of basic production infrastructure and the construction of Administrator’s Bridge, which linked the city with its chief economic exploitation. From a narrow 3-wide hewn log platform, the bridge quickly grew to become a 7-wide, semi-unfinished causeway which was then finished in the next week as an 8-wide avenue with guard railings, protecting drivers from the river below. While this was considered the secondary eastern exit from the city, Administrator’s Bridge and the adjoining Eastern Imperial Road soon became one of the most travelled hand cart routes in the era.

Early on this round we had Sans Tark and company settle to what was then the far south. This meant a lot of work for Praefator and Brume (our primary roadworkers) to ensure that an easy travel route was stamped out through the desert. Although not a new experience for the server, having an outlying town was a first for some of our standard player base, and certainly something that has not happened in a couple of rounds. Sans Tark and company were soon to show their worth, mentoring those who had taken up professions for the first time and providing an excellent onboarding experience.

Farming locations were scouted by Magana to secure consistent provision of essential foodstuff to our burgeoning new Chef, Belgareth1987, who had a voracious appetite for raw resources to feed the growing workforce and the high calorie demands of early gameplay. As the week progressed, small copses of crops turned into large open fields as the demand grew with the discovery of advanced campfire cooking, as well as the discovery that the southern continent was partial to bulk buying.

Despite limited to basic hewn logs and stone, players fleshed out the starts of their houses showing off everybody’s unique styles: Satsuki (the first  Sovereign, the title of the elected World Leader) went with her iconic Chinese inspired Satsuki Tower, Praefator adopting his neoclassical style in a (in terms of Praefator’s previous builds), a much smaller build weighing in at 11 by 5 plots; the size of two 5 by 5 plots separated by a road. Belgareth1987 weighed in with a Roman-esque villa and Bartleby brought a new style to the server with his ultramodern highrise building “The Voxel Warehouse.”

Despite the style differences, the standardized plot size and Capitol building guidelines made it so that all of these different design ideas fit into what would eventually become a diverse and beautiful landscape.

Despite our hard work in pre-planning the world, no plan can account for everything: in our case our enemy was the land itself. Roads had to start by being carved out of the side of hills just wide enough to let the carts pass single file. The Phoenixway, our main north/south road was forged beyond the walls of the Capitol by Brume.

This massive 4 plot wide roadway thinning down to 2 plots just beyond the city walls was the cause of many issues. Due to a lack of manpower this road construction stalled, planting the seeds of dissent in the southern settlement, chief among those feelings of resentment and envy arose. Calls of Capitol favouritism rang through the chat.

Competition is good for business

An unexpected side-effect of the prospect of two separate towns was the start of a price war (a first for our server), in which a race to the bottom occurred to present prospective buyers with the mortar they needed at the lowest possible rate, due to the abundance of supply through multiple people with the Mortaring profession. The differences in distance, types of stone offered, and aesthetic demands of the two markets soon led to a flourishing trade that pioneered the first building boom. In this era, numerous technologies were completed on a daily basis and became widely available through the public library building across from the Central Bank, and people prospered from contributing materials for research to the state at 150% of market prices. It was this state intervention that bought much of the new artisans’ inefficiently produced goods, allowing them to develop their businesses in a continual pace.

Research and Bank – Foundations of society beyond government

As soon as the world leader was first elected and the treasury was established, all new currency was printed directly into the treasury rather than into the personal accounts of the exchequer. Besides paying a backlog of road-paving expenditures, the bank immediately financed the construction of a government-owned building dedicated for technological research. With a stockpile in its basement and numerous chests to store the plethora of research materials, books, and scrolls, materials flowed through an actively-managed store that linked to the treasury. The library actively bought materials used in current research, and sold technology scrolls to everyone at token prices. This allowed for a regulated and organized management of knowledge and scrolls which all had similar looks and often misplaced by users who had direct access to the shelves.

While in the first days of Maiestas Haven, the government, central bank, and library are all managed by the central control of the Sovereign, this was the exception rather than the norm — as Sovereign Satsuki Shizuka has written at length, the separation of these three estates to different caretakers helps keep society responsible and in balance. As events in the next week will prove, having the world leader, bank exchequer, and other government and public officials as separate individuals is crucial in ensuring that the currency is in control from inflation or deflation, the laws are relevant and taxes responsibly spent, and research is diligently scheduled and managed.

While Eco promises multiple government mechanics in the future, present conditions already allow for multiple ‘government’ polities with these extrajudicial premises and estates. As servers become more populated and form groups, multiple ‘governments’ competing and collaborating with each other will undoubtedly add to the thrill and fun of the cycle’s experience.

This marks the end of the first part. For the second week, see here. For the third week, check this out!