One of the most difficult things in learning how to master playing ECO in style is the time-consuming, brain-wracking challenge of designing your own house. In ECO, one is limited in the number of privately-owned plots of land, and it is important to make the often-expensive materials and painstakingly-designed work fit within the protection of the claim to prevent theft and vandalism.

What are some good practices of designing a house that is pretty, functional, and fits on the block? Let us first start with the floors and walls: Having a floorplan based on the size and shape of your territory means a lot to having an efficiently-designed home and workshop, so let us begin.

Consider this: In a grid system, a room must have at least 4 corners to form a rectangle or square. How big must it be in order to fit things to work in?

In ECO, work tables are usually 1×2 in size, and 1 tall – but in order for them to operate, they require 15 to 25 m^3 of extra room space to operate. To make things easy to count, having a room 5 blocks high makes it easier to calculate the room space, and helps if you want to squeeze in that extra workbench to make things work. In addition, it makes your house look just that much more presiding. It’s good form.

While the monster-cube, or the pervasive design where one builds a giant building right on the edge of their property, occupying all the space into an envelopment is the best way to get the maximized room size, it is rather unsightly and if not spaced out properly inside, a waste of room potential for maximizing your earning of house-based skillpoints and experience.

The art of building a house with style is to properly balance having enough space inside the house, with leaving space for the outside — things like shapes for the building, special-looking roofs, or outdoor features like patios, lawns, and gardens. Even the driveway into a garage or dugout basement requires much pre-planning, if you want to maximize space between being able to drive your car in, and stuffing that extra stockpile.

The concept of 間 (read “ma” in Japanese, or “jian” in Chinese) in architecture defines space in a room, and by extension is a standard unit of measuring such space. In Chinese traditional architecture, it is defined as “the amount of space between from one pillar to the next,” and is often used to describe not just one-dimensional distance but also two-dimensional space, a.k.a. floor “square footage.”

Asides from two things, in ECO one is technically free to build as they please: The first being that this is a voxel world and size is measured in the standard cubic units blocks and objects are placed in. The other is the “claim plot,” which is a 5×5 block area one “land claim paper” can get you to become your personal property. The locations and boundaries of each claim is also preset by the world, so that the entire world is neatly divided into claims of equal size, so the exact positioning of these plots will also neatly organize you with others doing the same.

A single plot is much too small to build a house (It is just enough to place down one stockpile). After repeated trial-and-error, we have discovered that the ideal size for making a shop stall (complete with a dug-out basement to store the stockpiles and chests) is 2×2 plots, while a one-storey house with a sizable living (generic) room, kitchen, bedroom, washroom, and a small workshop is at least 4×5 plots. On a server that shares their research or starting duties, it is relatively simple to obtain 20 land claim papers (with the initial 9 given by the system as soon as you collect them from laying down the campsite and inside the camp) with only 1 or 2 researches done (or perhaps some new system, when ECO 9.0 revamps the land claims system).

It is not important to have to claim parts of your house that are considered “outdoors”, such as a garden or lawn, unless you feel someone will troll and destroy or block your property – in any case, the server administration will handle that expediently. Focus on claiming areas that you will build rooms in.

Once you have a contiguous plot of land, start by first insetting or ‘removing’ the outer border by 1 or 2 blocks before you put down your corner pillar. There are two good things from leaving that space open – it allows for one to place lights, lamps, or signs to the outside of the building without seeping past the borders of your claim (so people can steal or worse, deface them), and it also allows for patios or beautiful overhang roofs (like the one pictured on the cover) to be made. Don’t worry – you’ve still got plenty of space inside.

Next, space out your next pillars. If you like to plan ahead, you can use a spreadsheet program (or some traditional grid paper) and draw a layout. If you’ve started with an inset of 2, your first pillar should be right in the middle of the corner plot. If you want to keep all the other pillars to be also in the middle of the plot, you can easily make 4×4 rooms using this pattern. If you want to expand a bit more and make 5×5 rooms, you can consider using the remainder space as a hallway. For a 4×5 plot (or 20×25 block) space with an inset of 2 blocks, one can easily make a rectangular building with two 5×5 rooms on each wing, with a smaller room or hallway of 2×5 sandwiched between or on one side, with a 7 wide space in between that can be further divided or used as one (or several) larger rooms. If you want to build staircases, this would also be the perfect space to do so. Below are two example layouts that utilizes the entire 4×5 plot space: 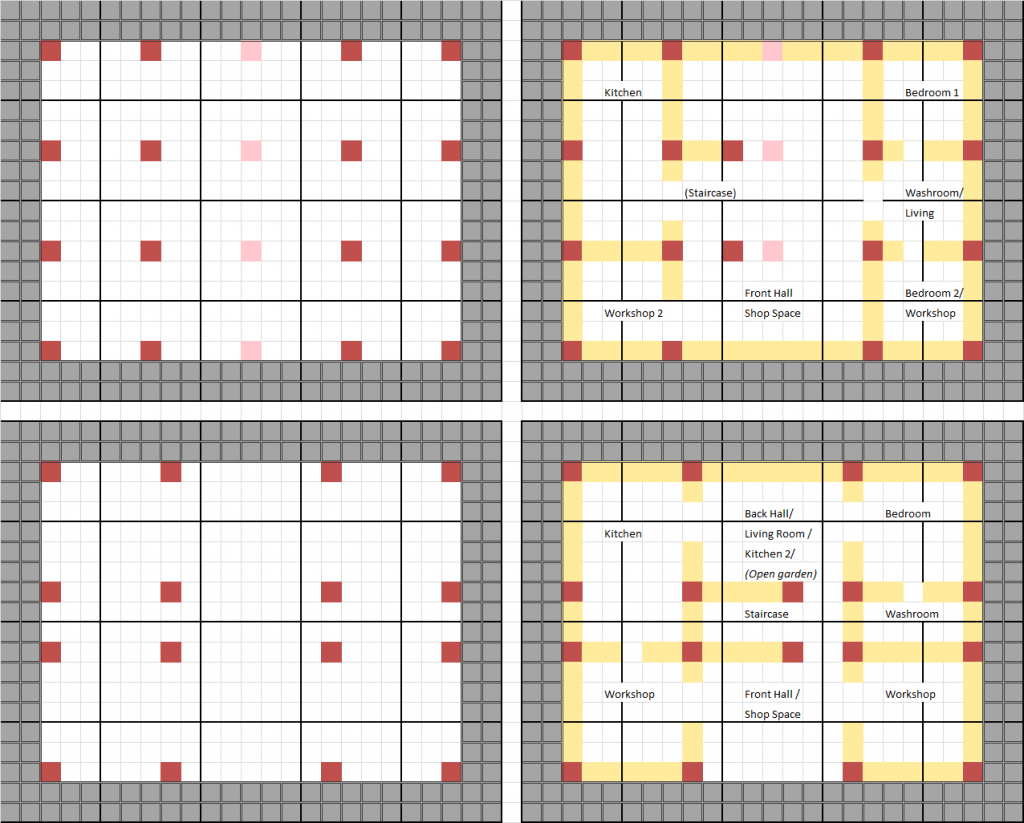 If symmetry is not your thing, feel free to mess around! But by measuring your space with pillars and then connecting them with walls, you can easily measure, shape, and reshape rooms that are both functional and beautiful quickly, and always in accordance with how much space you have been given. That is the ancient wisdom of “ma” in practice.

Note that in the above two designs, there’s even enough space for redundant rooms (which is always a good thing) — if you feel like you have enough space, why not try turning even more floorspace into an outdoor area, and consider building a second floor instead? There is always something new to try.

Next lesson: How to build that coveted roof!