Welcome! This page serves as an overview for the proposed way governments are to operate with Beta 10.0. I’ve come up with a more elaborate series of flowcharts compared to our pre-9.0 government, which in addition to being designed with multiple towns in mind from the start, additionally features a separation of powers. Up until now, much of the traditional separation of powers didn’t really exist.

With Beta 10.0, global laws are no longer a given. Thus, each city is free to develop as they see fit, with an eventual end-game of coming together under common ground in a global government. As such, the following diagrams aim to explain the proposed new system, where each town has its own laws and affairs, with the capital not interfering whatsoever unless it’s deemed necessary for the global society.

Since it will be quite some time until Beta 10.0 comes around, starting with Beta 9.0 we will put our attention towards making extensive use of districts to simulate ‘local’ laws as much as possible.

Of course, since it’s a rather invasive step to even consider, I’m thinking of it requiring 2/3rds to unanimous agreement among the parties negatively affected by the situation. Details and specifics can be discussed until the time a global government is to form, after which a vote will be called to either formalize it or reject it outright. 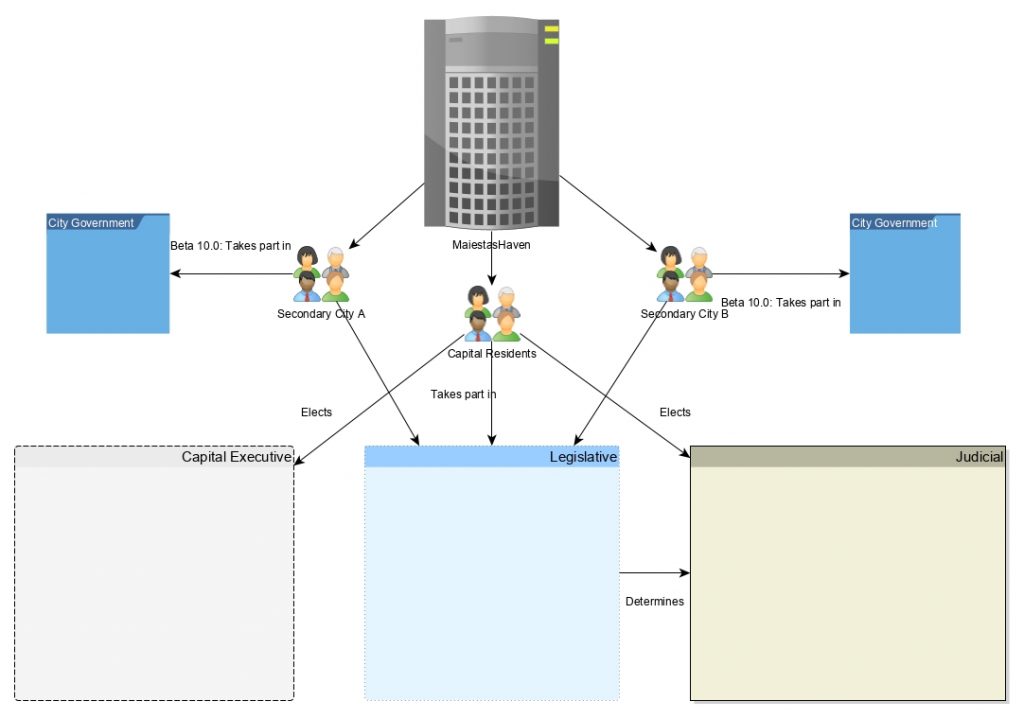 Overview of the proposed government system

For purposes of illustration, the above shown overview assumes two secondary cities to spring up. Do note that this is in no way reflective of how things must remain – as the server grows, there may be a time where town specialization overlaps with another, unless world generation is configured in such a way that there are to be more continents, in turn giving way to a more natural way of spreading resources around.

An overview of the executive branch of government, proposed for the Beta 9.0 map cycle

As shown here, what was once “the entirety of government” is proposed to become the executive branch of the capital. In this system, the President is voted upon to initiate policy proposals for the capital, as well as signaling problem areas to be addressed.

As before, the “Master of Coin” (now dubbed Finance Minister) ensures the capital’s economy is functioning to its full capacity, as well as initiate proposals towards increasing the amount of currency in circulation.

Meanwhile, the Interior Minister oversees all labor occurring in the city. Think the construction of a public mine, the Mason workshop, but also making sure citizens have ample building supplies to build their homes with.

The Foreign Minister on the other hand, is someone who focuses on the relations of the various towns both among each other, as well as the way the interaction with the capital progresses. He or she would also be the first point of contact in case of a disagreement, and be the first one to attempt to defuse a situation from escalating.

If on the other hand de-escalation fails, it falls to the Defense Minister to mitigate the occurring fallout and ensure the capital is impacted as little as possible. During less tense moments, the Defense Minister is there to make sure infrastructure is built up and technology advances. As such, an Engineer is preferred to take up this role. 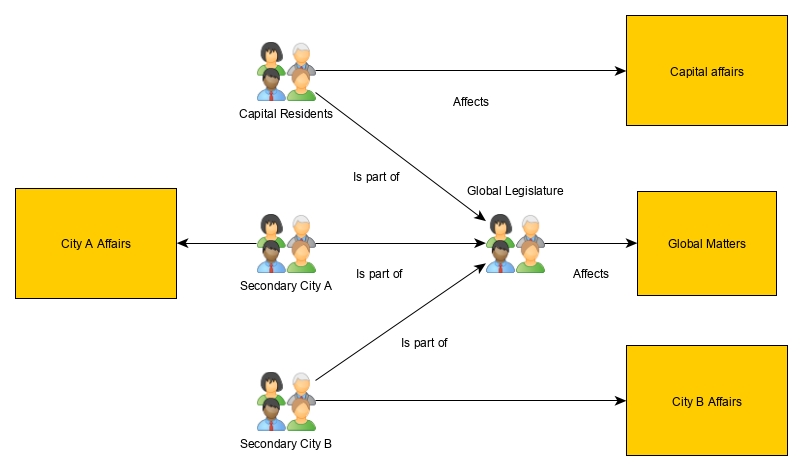 As shown here, each respective city primarily concerns itself with their own affairs until the time arrives when a global government is ready to be formed, after which the Capital will ask the secondary cities to put forth people to take part in global governance, which can be as simple or elaborate as the combined legislative branch (think ‘United Nations’, but in a much more functional way) agrees upon.

Seen here, in its current proposed form, the judicial branch is an extension of the executive branch, as there have been no announcements development-wise as to how the concept of ‘crime’ might be introduced to Eco. As it stands now as well as for the foreseeable future, it’s not possible to break the law.

If, on the other hand, it becomes possible to break the law, where crime and punishment becomes a player-managed affair, the judicial branch should be a panel of impartial judges, whose tasks include: