Build with Satsuki! Building a roof: Designs and how to do it

“A journey of a thousand steps is halfway through at the 900th mark.” – Stratagems of the Warring States – Qin

Building a complete house can be arduous task, and for many ECO players, the most difficult and puzzling art is in the building of a roof. How does one reach so far high up with only your bare hands? If you build a stairs or ladder up, wouldn’t that be another hole and another floor? Here I will introduce several ways of building a roof without having to resort to having “creative mode” fly commands!

Before building something, it is important to have an impression of what the finished product would be. Roofs are diverse and often indicative of the culture, knowledge and experience base of the builder. As a roof-heavy design, Asian traditional houses literally hold down a building with the sheer weight of a building with its roof, where the bulk of building materials go. As technology improves, so does the variation on its structure. Here is a sample of different roof types: 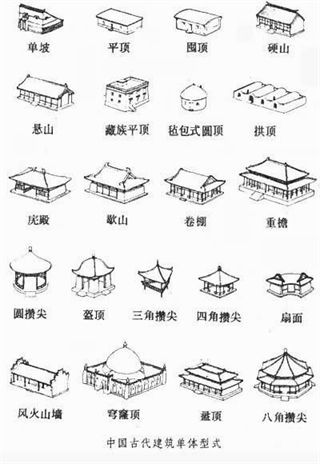 For the purpose of ECO, a voxel game, rectangular or square layouts are generally more useful, followed by a close approximations to round domes, then finally octagonal or hexagonal roofs (which are not possible unless mods are available – and at the moment even our server’s modded blocks are unable to replicate).

In more generalized sense, there are two major types of angled roof categories, along with flat top roofs, domes, and spires: The hip roof and the gabled roof. The hip collapses on 3 or 4 sides, converging towards the center of the building, while the gable roof only collapses on only 2 sides, leaving one side open for a triangular wall – the gable. 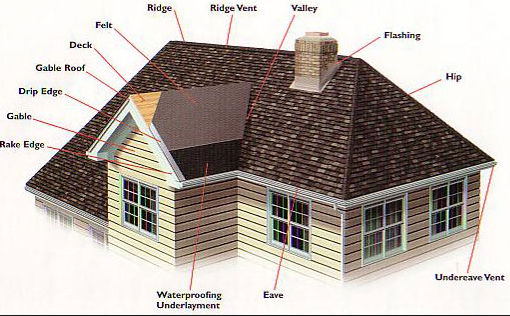 The shape and form of roofing used depends on the size of your house, budget or availability of material. Always remember that asides from a flat roof, a roof is a floor of the house itself and should be budgeted as if you’re building an extra floor, and building a roof will always net you less interior room for almost just as much material. Depending on your base height, your usable space will always be only about a third as compared to building a square box, so use this attic space wisely, or keep it as a personal space away from the guests – unless creating an intimate setting is your intention.

In my previous tutorial, I taught that everyone should leave at least 1 or 2 spaces away from the edge of the property in order to build overhangs or to put lights on the wall. All roofs have a little bit of overhang in order to let precipitation like rain roll over the side instead of down the walls, so it is natural to have the roof just slightly larger than the wall enclosure. Also, by expanding the base of the roof’s triangle, you will also need more height to close the apex or ridge of the roof, which means more space altogether inside – and for an attic, you’ll need every bit of space.

For Tier 1-3 (or “Classic ECO”) blocks, in order to create a diagonal roof you’ll need to place two block-deep layers in a staggered stack in order to create a slope, whereas with the new blocks released in 9.0, you can position and select the blocks manually, thereby thinning the internal layer out. However, because you WILL be placing roof panels diagonally, you will either have to temporarily place another block to leverage up the next piece to make it “float” to the right position, it is easier to have a corner to start with for hipped roofs, or a gable wall or facade if you are working with gabled roofs.

When do I use which roof, now?

Although Asian architecture has some rules about who could use what material, or when to use what kind of roof for a building, we find more often exceptions to the case – like “I before E.” However, there ARE some things you can consider when you draft or build your roof design:

ECO’s early blocks are programmed to automatically form hipped roofs whenever possible, caving in on all four sides, to form either an apex point or ridge line at the top. This kind of roof requires the most amount of resources to build the least return in attic space.

In Chinese architecture, hipped roofs are also called “5-spined, 4 sloped roofs,” because it has one top ridge, followed by four flowing out to the corners. This design is reserved only for the largest and most important buildings: main halls for temples and palaces, or the main gate to these important structures.

For the square variety, however, they are usually applied to the smallest structures: open pavilions and gazebos are the most common applications. In real life, tented roofs (zhuanjian ding 攢尖頂) can be used in a number of shapes: triangular, square, hexagonal, octagonal…or even round. The largest structure using this kind of roof is Qi’nian Hall, at the Temple of Heaven in Beijing.

To build a hipped roof, one builds concentric rings (or rather, squares/rectangles) 2 deep and stack them layer by layer until it converges to a point or line on two sides. For large structures, you will want to build an attic floor and leave a work opening large enough to jump out from one side, and walk up the roof from the outside as you go. For small pavilions, however, a ladder climbing up to the roof above is a must. For light-hanging or decoration, consider adding cross-beams in the middle. 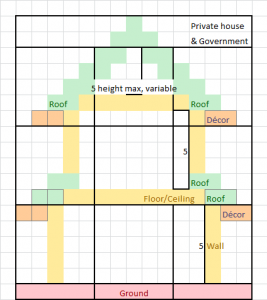 If you have a 2-tile inset from the perimeter of your claim, then you can start your hipped roof from the top edge of your side wall. The second layer of roofing would then effectively become a 2-tile extension of the floor above. Depending on whether you would like to create a “pagoda style effect,” you can even add a third layer of roofs before building the walls of the next floor to create a slightly smaller size, creating the tower effect. If you want to keep the same size for the next floor, however, keep your roof to only 2 layers.

Overhanging gabled roofs are the earlier kind of gables, and exposes the structural pillars within. With the advent of bricks used on an industrial scale by the 16th century, hard gable designs became increasingly common. At around the same time, gable walls take on a stylized form by building them higher than the roof itself, becoming an aesthetic feature of the house design, while also having the function of (somewhat) preventing its spread when the building catches fire. Because of this function, this type of gable wall is called a fire-containing mountain wall (fenghuo shanqiang 封火山牆), which later takes on the homophone for wind to become (fenghuo shanqiang 風火山牆), or “wind-fire mountain wall.”

Unlike the wider side, gable walls are usually completely stone or brick and have the added bonus of being fireproof with nothing sticking out, which allows houses of this design to stack easily into rows and closer than the others.

In ECO, this means you can build a gable wall just 1 block away from, or right on the property edge without problem. Also, try using pillars and walls instead of solid blocks on the gable wall to recreate the overhanging roof feel with the exposed rake edge and spine of the roof. 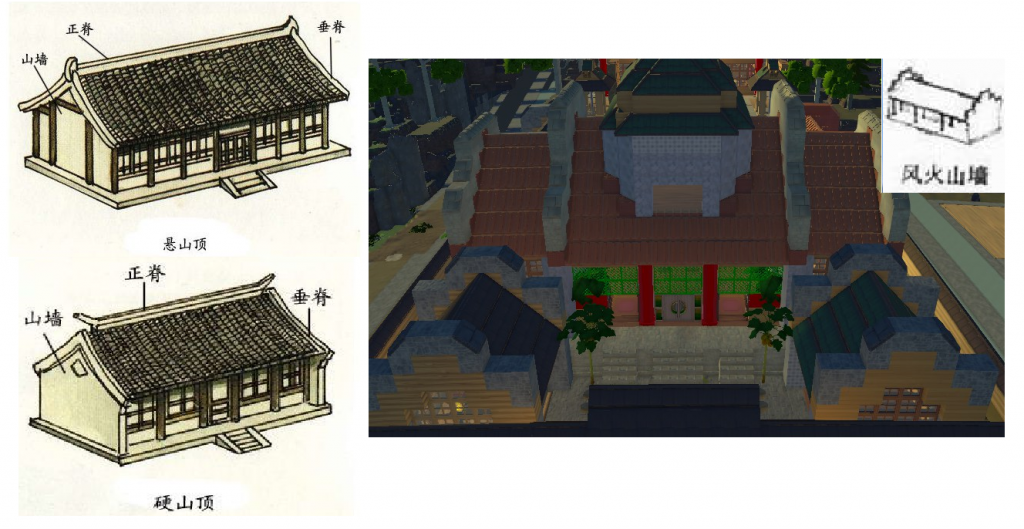 Traditionally, gabled houses were considered low-class housing (hanging gables 3rd class, hard gables a rock-bottom 4th class), but palaces sometimes feature them as adjunct or even office buildings. The advantage to gabled roofs is that you can fit them to long or narrow buildings raising a minimal overall height of the building with little structure material. The downside is that like other small buildings, you may find it easier to build the roof with a ladder or temporary staircase up from the outside rather than from the inside, and the “fireproof wall” design (right) can be quite difficult to access, too. If you want to keep the building height consistent with buildings with other roof types, you might want to consider lowering the side wall height by 1, so that the attic space merges with the room below. 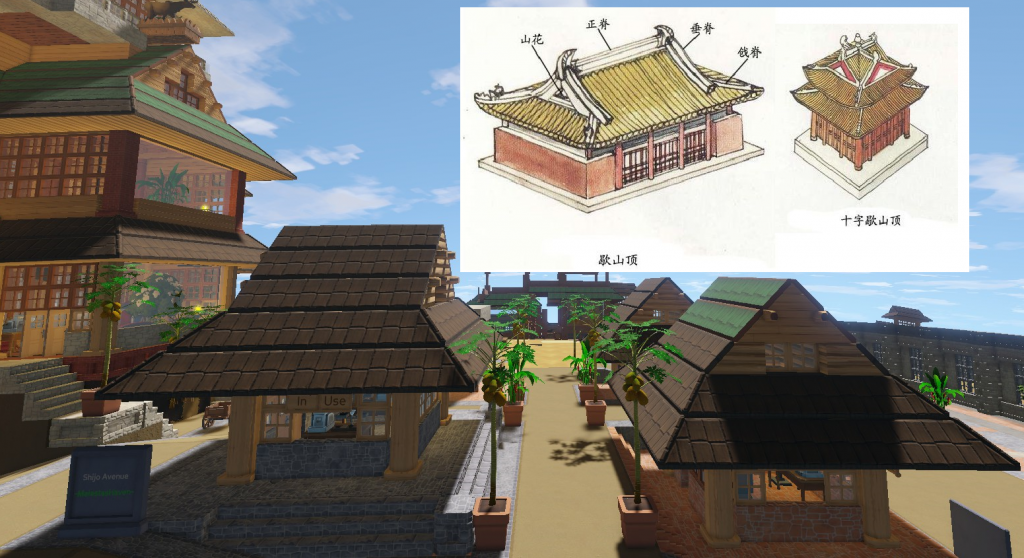 By combining the two major roof styles, we get the hip-and-gable roof, which by traditional standards is the second rank of roofs, usually used by secondary palace halls and towers, as well as the main halls of nobles and officials’ homes. The corner spines of the hipped roof are broken off midway and then resume straight up along the ends of the gable part, it is called a break (xie 歇)-gabled style. Because of this, it is also called the “9-spined roof,” and it is much loved for its distinct profile and is often considered as the “iconic” Asian roof style.

In ECO, the hip-and-gable roof is perhaps one of the easiest and user-friendliest roofs to build, and is compatible with almost any size of the building underneath. The reason why it’s considered some of the “easiest” roofs to build is because provided if your attic or roof beam is accessible (walkable), the hip part of the roof becomes an extended platform for people to walk on, and this platform can even be built starting from the floor below. Then, using the existing hip roof, continue the slope from the long side up to create a gable roof – and close off the gablet (the triangular space where you can wall up) using windows – this is known as the shanhua 山花 or “mountain decoration” wall.

Earlier buildings using the hip-and-gable roof had open shanhua and had to have extra decoration extending from the gable roof to protect it from wind and precipitation blowing in, hence the gable part is usually made as flat as possible. From the 17th century onwards, people started to fill in the shanhua with brick or carved stone walls, and the roofs started to rise in angle and height. As most famously depicted at Beijing’s Forbidden City corner tower, there’s even been some experimentation with a cross-beam hip-and-gable design that features the gablet on all four sides.

Please note that in ECO, 2 of the 4 valleys will not align properly when you attempt the cross-beam design, unless you manually put in the blocks yourself with the new Tier 4 blocks yourself.

Going above and beyond 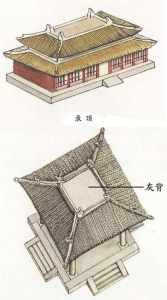 After understanding and familiarizing the basics of roof design and construction, one can then try to add even more variations. Perhaps create a compound roof (chongyan 重檐), so that there’s two roofs stacked one on top the other, to raise the room even higher? Or, to limit the height, flatten the top of a hipped roof to create a flat-top (luding 彔頂) hipped roof? The potentials are endless.

Have fun, and go make the most impressive buildings out there, and have fun with new designs after establishing the fundamentals of building design!