And so we begin

After 9 months of the server existing, I decided to finally do something about my domain just serving as an email domain up until now. Recent events have led me to start thinking about having a method of both conveying my thoughts and the reasoning behind the choices made by myself as well as the server staff as a whole.

Word of warning in advance: this is a long one. Subsequent posts may or may not be as long, depending on the feedback I get as we go along. So let your voice be heard (like in #player-feedback?)

With that said, before I started writing this post, I created two supporting pages, which I recommend you read 🙂
These pages being the About MaiestasHaven page, and for the more future-oriented among you, the Roadmap should be right up your alley.

Anyway. As of 8.2 I am worried about the long-term appeal of our map for people to continuously come back to, MMO-style.

I’ve done some research on the topic, and I believe I have identified at least some of the reasons for that. In the following paragraphs I hope to have shed some light as to why that is.

First of all, I’ll introduce a model for player types, which will form the basis for my reasoning. If you prefer a more TLDR version:

We have thus far primarily catered to the wants and needs of only a small subset of players, being the Explorers who like to find out how things work and to implement complex game systems (like our sophisticated economical system) as well as Achievers, which you can see most visibly in the palace builds. In other words, we have maneuvered ourselves into a niche position, and to be able to mature as a server, we need to diversify the server’s offerings for all playstyles.

For instance, the Museum becoming a map-long event with both a static as well as a dynamic component to it, where people can meet up, chat and discover something not directly related to meteor-busting progress, but instead learn about much more cultural things, like how various roof types are made (‘static’ content) as well as progressing down the technology tree (‘dynamic’ content, requiring an ever-diverse group of specialties to exhibit).

Additionally, Killers should find at least some appeal in the expanded ‘PvP’ coming alongside 9.0, with multiple towns competing for people, resources and the health of their respective communities.

Should you wish to read up in-depth, the following is a very interesting 4-page reader, which may additionally provide some insight into yourself as an added bonus! Personality And Play Styles: A Unified Model 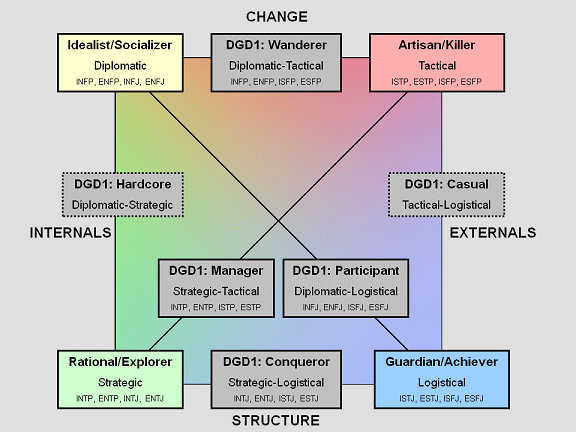 While looking very complex, I’ll do my best to break it down:

The ‘hybrids’, being Wanderer, Hardcore, Casual, Manager, Participant and Conqueror, are designed to fill the gaps – nobody is ever ‘just one quadrant’.

The important thing to take away from this is the following: Without Socializers to both brighten up the world and ‘liven up the place’, the world quickly becomes a stale, lifeless hunk of blocks aligned in a grid with pretty shapes. That’s not what I envisioned when I set out to provide a haven/bastion of both order and life among the abundance of chaotic servers (as any Alpha-era player like Satsuki or Kobayashi can attest to)

Additionally, without Killers to try and disrupt the ebb and flow of progression and shaking up the status quo in the process, each successive world quickly becomes a repeat of the previous, albeit aligned differently.

It is for these reasons that I anticipate 9.0 to shake up the server in a good way, both by sheer quantity of changes, as well as the beginnings of changes of a whole different nature. Of course, there’s also game mechanics at play here, which the 9.x update cycle should address to a significant degree, as they have been stated as being collaboration-based.

There’s more I wish to write about, which I’ll put in a followup post: Part 2